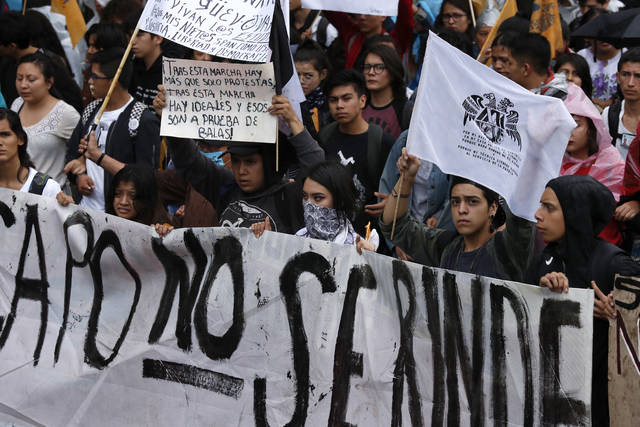 In the past few weeks, the university system in Mexico has been awash with aggression and subsequent demonstrations as students demand justice for attacks on students earlier this month.

On the 50th anniversary of the March of Silence which saw Mexicans protest silently to counter claims that student demonstrations were exceedingly boisterous, numbers in the thousands marched on downtown Mexico City yesterday, according to the Associated Press.  In order to commemorate the day, a number of yesterday’s protesters taped their mouths to symbolise the silence and carried signs that suggested being a student is as dangerous as being a criminal.

Over the past 50 years, there have been countless reports of attacks against the student population both from government authorities as well as criminal groups. The controversial disappearance of 43 students in September 2014, known as the Ayotzinapa case, remains open and unsolved despite fervent calls from Mexican civilians to resolve the issue.  Though many details of the event remain unknown to this day, students from the Rural School of Ayotzinapa were commemorating a 1986 student massacre when events quickly unravelled and the students were attacked, with 43 kidnapped. Their whereabouts remain unknown although many presume they have been murdered.

There are also increased fears regarding the safety of female students,  following the murder of 18-year-old  Miranda Mendoza Flores who disappeared after leaving UNAM in Mexico City for the day in August. Her naked and burnt body was found a day later and students and professors have since called on authorities to properly investigate the circumstances and bring the case to justice. Furthermore, the Associated Press highlights another case in which three film students were killed this year and their bodies dissolved in acid by Mexican cartel groups after they were mistaken for being rival gang members. Frustrations continue as a number of cases have not been fully investigated and little justice has been brought against perpetrators.

Protesting has continued to be a key tactic used by students across the globe to voice concerns and bring about much-needed change. Like in Colombia this week, the Mexican student protests have brought considerable media attention to the fears that students face whilst trying to achieve their degrees. However, with aggression towards students stemming back through the decades in Mexico, so far there doesn’t appear to have been a solution, nor adequate protections, provided by the government to aid the country’s next generations.

Mexico could be paid to send migrants back to native countries