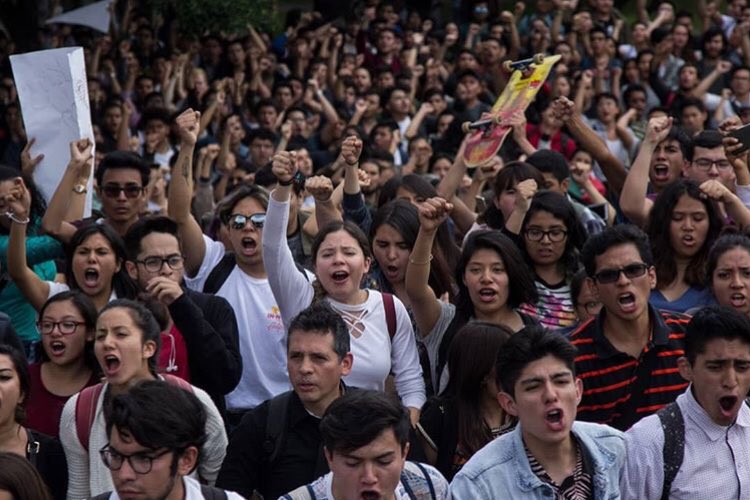 Eighteen students have been expelled from Mexico’s National Autonomous University (UNAM) following a series of protests that turned violent at the start of this week. As a result, today a further strike will be held by the university to mark solidarity with the injured demonstrators, the strikes also land on the fifty year anniversary since the Tlatelolco Plaza student massacre.

This week’s events unravelled during a course of demonstrations by students of CCH Azcapotzalco high school that is tied to the University. According to reports, the demonstrators were campaigning for free speech and against university fees when they were violently set upon by other students who are associated with groups known as ‘Treinta y dos,’ which have been labelled by local reports as one of many vandal organisations. The attackers are believed to have been wearing specific colours that represent the UNAM shield and used stones and firecrackers in the attempt to disperse the group.

Fourteen students were injured in the attacks, including two that suffered serious wounds which have been identified as  Emilio Aguilar Sánchez and Joel Meza García. The perpetrators continue to be identified through video footage of the attacks, which have led to the definitive expulsions as well as the pursuit of criminal complaints against aggressors who are not students.

Since news of the attacks, a number of faculties have spoken out against the violence on campus. Over 500 students yesterday gathered to demand justice for the victims and punishment for the accused students. Furthermore, at 1 pm today there will be a larger UNAM march in a call to stop violence, as well as 48-hour strikes in a number of university departments.

It comes amidst ongoing strikes in the last week following the dismissal of the Director of the College of Science and Humanities, María Guadalupe Patricia Márquez Cárdenas, reported Animal Politico. Further activism from the student body followed the murder of 18-year-old  Miranda Mendoza Flores who disappeared after leaving UNAM in Mexico City for the day in August. Her naked and burnt body was found a day later and students and professors have since called on authorities to properly investigate the circumstances and bring the case to justice.

Does anyone have examples of positive ways that universities or high schools have responded when one of their students was assassinated? Here in Mexico, H.S. student Miriam Mendoza was kidnapped & her burnt body left in a ditch and there has been little response from the school.

The university is not unknown to violence and protest, nor does the country forget the recent aggression that Mexican students have faced over the decades. Today’s march will commemorate fifty years since tanks stormed Tlatelolco Plaza where hundreds of unarmed students were demonstrating. These days considered a massacre, the true number of civilians that were killed by the military remains unknown however some accounts suggest it could have been up to 3,000, of which just 40 casualties have been documented.

Similarly, the controversial disappearance of 43 students in September 2014, known as the Ayotzinapa case, remains open and unsolved despite fervent calls from Mexican civilians.  Though many details of the event remain unknown to this day, students from the Rural School of Ayotzinapa were commemorating a 1986 student massacre when events quickly unravelled and the students were attacked, with 43 kidnapped.  Their whereabouts remain unknown although many presume they have been murdered.

Like in many parts of the world, students continue to represent a call for the freedom of speech in face of oppression that is unshaken.