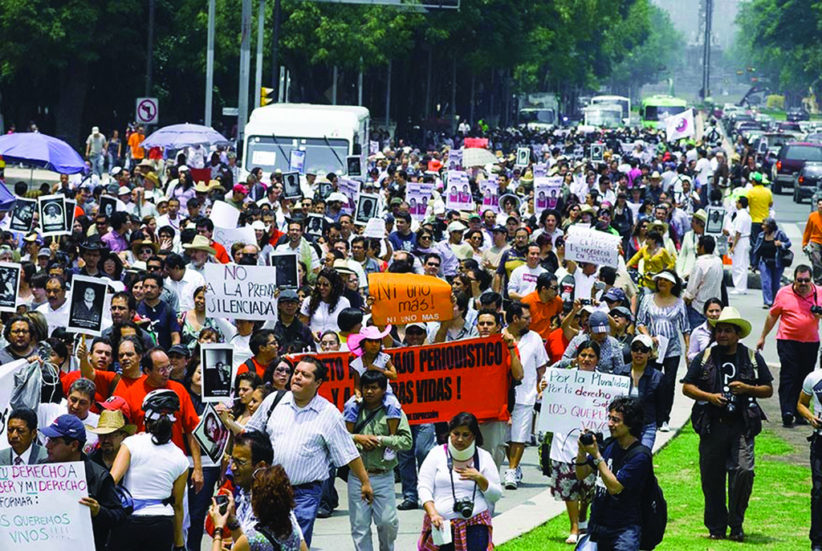 Mexico, Colombia and Brazil have been ranked Latin America’s three leading countries with the highest rate of impunity against journalist murders, according to a new impunity index by the Committee to Protect Journalists (CPJ).

In a year where the silencing of journalists has, in itself, made headlines around the world, failing to protect the freedom of press appears to link to further failures in democratic systems.

It has become somewhat common knowledge that the role of the media, and especially that of journalists, has continuously shifted alongside the growth of the internet, social media and certain political movements. In the United States, as well as Europe, attacks upon media outlets, combined with vicious smear campaigns and verbal abuse are also becoming more common.

Despite the increased threats against the deliverance of news, what makes Latin America stand out amongst the highest perpetrators of unsolved murders is that Brazil, Mexico and Colombia are not involved in a form of either civil or conventional warfare. Unlike Syria, Somalia and Afghanistan, Latin America continues to have high murder rates despite being considered at peace.

What’s more, Mexico has even surpassed all war-torn countries when it comes to journalist disappearances, making it the most dangerous country in the world for media workers.  Across the Latin American spectrum for 2018 alone, Mexico has tallied at least 10 journalists who have been killed whilst Brazil counts three and Colombia, two. This, however, fails to factor in verbal threats against the press and it is believed that, out of fear, a number more cases across Latin America continue to go unreported.

Despite the reduction of internal conflict following the Colombian Peace Agreement, 2018 also marked a new wave of violence towards press in Colombia. Following the election of Ivan Duque, an ‘ugly climate’ since the election has led to increased death threats for the country’s media organisations, reported The Guardian. This was followed by the murder of two Ecuadorian journalists and their driver by Colombian attackers in an area of the country that has been considered by some as still considerably lawless.

A similar trend of violence by unknown gunmen has been seen this year in Brazil. According to Reporters Without Borders, the country saw two journalists shot and killed in the space of two days in what are believed to be unrelated attacks. Both journalists had often written about politics and investigated local government corruption.

It is believed that the majority of attacks against journalists in these countries are connected both to organised crime groups and government officials. The general trend is that targets are usually local journalists who are involved with reporting on political happenings and officials. In the case of Mexico for instance, at least 48% of registered attacks against journalists are believed to have been ordered by officials from the three levels of government, according to Julio César Colín Paredes, who oversees protection and defence at NGO Articulo 19.

Fear of death in the line of news reporting has led to journalistic self-censorship particularly in the reporting of politics, crime and corruption across the three countries.

Last year, an in-depth study in regards to attacks against the press was released by academics from across Europe. Titled, ‘Canaries in a coal-mine? What the killings of journalists tell us about future repression,’ the eye-opening data suggested that countries which experienced increased violence towards journalists, which is connected to government control, often saw a deterioration of human rights conditions for the general population within two years.

It is a startling connection which runs parallel to both ongoing attacks towards media even during ‘peacetime’ in all three countries, as well as the election of three new governments which are in some cases, at extreme ends of the political spectrum.

Although Latin America in general experiences continuous degrees of violence that mirrors that of increased threats towards the press, heightened efforts to support journalists doesn’t appear to be effective in the majority of cases.

‘‘We try to be a liaison between the protection of institutions and the journalists. We try to help them out and get them some guidance on how to best navigate the institutions and how to seek help,’’ CPJ representative Jan-Albert Hootsen recently told me. Although there are organisations such as CPJ and Reporters Without Borders who support news reporters on an international scale, the representative also revealed that a number of journalists are even afraid to seek help from official organizations due to a lack of trust.

What’s more, all three countries offer state mechanisms for journalists and human rights defenders which can allow for the provision of security personnel and even safe houses or removal from the local area if the threat is considered critical. The catch is that some of the people who seek protection by the authorities, are in fact running from the people tasked with protecting them.

With planned cuts to media funding in Mexico, a number of journalists are expected to lose their jobs and the president-elect Andres Manuel Lopez Obrador has expressed negative sentiments about the media in the past. Instead of answering the question of a female journalist in Tijuana on September 20 for instance, he decided to kiss her. Brazil’s Jair Bolsonaro is, of course, no better. Though reaching for the opposite end of the political spectrum he has hurled out the term ‘fake news’ and expressed a distaste for mainstream media. In Colombia, a string of recent attacks on activists, the press and community leaders signals what could be the potential crumbling of the country’s 2016 peace accord.

The ‘canaries of Latin America’s coal mines’ appear to be faltering.

Day of the dead arrives in Mexico