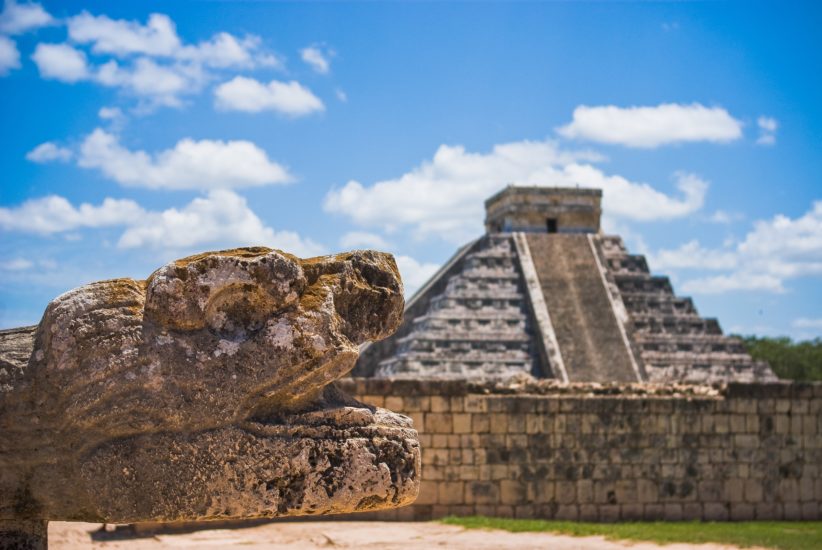 Nestled some 40 minutes away from the colonial town of Valladolid, Yucatan, lies the pre-hispanic city of Chichen-Itza. It sits in an area of Mexico that is renowned for some of the world’s more pristine beaches, dense green jungle and thousands of cenotes full of turquoise blue waters. Being close to the party destination of Cancun means the area is ready to cater to everyone.

It is also not short of tourists, and in peak season can see as many as 8,000 selfie stick-wielding visitors descend on the ancient ruins each day – and with good reason.

Nearly 1,500 years ago, the site was home to one of the greatest Mayan cities in the region and today boasts countless ruins that firmly reveal the seemingly near-impossible abilities in Mayan and Toltec construction. Though the art from the stonework and temples may have faded, the magic and beliefs of the ancient cultures linger in the faces of serpents carved along temple walls and the mystery of what took place inside some of the stone buildings.

As well as vast the Great Ball Court, the city once boasted an observatory, a market and is believed to have been home to one of the largest economic centres of the ancient civilisation. And if that’s not enough, during the Spring and Autumn Equinox, the sun casts a shadow of a serpent that appears to slither down the staircase of the pyramid for just two days of the year.

Its fame in the area and no doubt worldwide was sealed when the site was named one of the New Seven Wonders of the World, and a UNESCO World Heritage Site.

Despite the site’s obvious beauty and wonder, that brings vast amounts of tourism to the neighbouring villages and cenotes, as of this year, the site has been the topic of contestation with authorities choosing to hike the price of admission up by 110%. According to Riviera Maya News, the state government of Yucatan has agreed to hike the price from 242 pesos (US$12.70) to 480 pesos (US$25.25), as of February 1. The decision led to protests from local tour groups and concern from the tourism sector citing overall economic losses and a decrease in visitors. On the contrary, the price increase is expected to be used to improve site maintenance and create a new space for tourist vendors.

With just two days remaining before the price increase is set to come into action, and after visiting Chichen-Itza, it seems unlikely that the price hike will affect the many tourists who have already committed to visiting Mexico, especially from destinations such as the United States. However with a minimum of 40 pesos (US$2) each way for the cheapest travel option and accommodation often in higher price brackets, low-budget travellers might be the ones who suffer the hit.

With this in mind, however, we take a look at how much it costs for an adult from a western country to enter the other six world wonders without an organised tour.

The city of Petra, also known as the Rose-Red City, dates back to 1BC and has stood the test of time against earthquakes and empire rule to see millions of tourists every year. Created in pink sandstone, temples, tombs and caves are what can be found in Jordan today.

For visitors who are not staying within Petra itself, the price to enter is 50JD, however, the price decreases based on the length of days that you spend there.

Although many choose to complete the Inca Trail, which takes around four days and ends with Machu Picchu, it is also possible to take local transport and visit the site within a day.

Adult entry to Peru’s famous Inca ruins costs US$70, however for the adventurous visitors who wish to take on a further two-hour steep cliffside hike and ascend the much higher Huayna Picchu for a different angle of the ruins it will cost US$86.

Although there have been recent efforts by authorities to raise the admission price particularly for Indian visitors, a small hike in price for foreign tourists will set you back US$15.

Indian tourists, in fact, make up the largest percentage of visitors to the site, however an increase in price – from 50 rupees to 250 rupees – is anticipated to have a huge effect on the number of visitors.

“This will cut down the number of visitors to the mausoleum by at least 15-20 percent and generate revenue for its conservation,” an official from the Archaeological Survey of India was quoted.

Towering 30m above Rio De Janeiro, it is not the tallest Jesus Christ statue in the world (this can be found in Poland) however, it is difficult to miss the statue that towers over everyone’s stay in the Brazilian city. Your own transport is required to reach the entry port, wherein high season for 49 Reais visitors will be taken by shuttle bus to the top and given entry to the site.

The Roman Colosseum is the largest amphitheatre to ever be built and boasts a long history of bloody competitions from inside. At its height, it is believed to have held up to 80,000 spectators whereas today some 4 million visitors enter annually. For members of the European Union, entry is half price and for under 18s access is free.

According to Bookmundi who have produced an extensive guide to accessing the Colosseum, a visit for both sunrise and sunset is strongly recommended, and visitors must note that selfie sticks are banned within the historic site.

Spanning roughly 6,000km and currently, in varying degrees of restoration, there are in fact a number of parts of the Great Wall that visitors can access, which means they are in different price ranges.

Jinshanling is one part of the wall that receives some of the highest amounts of tourism and entry in peak season will cost just under $10. The wall’s distance from Beijing, however, mean many will opt for an all-inclusive tour. Other parts of the wall are also cheaper to access, but less popular with tours and visitors.

Over 770,000 children were not vaccinated against measles under former government last year