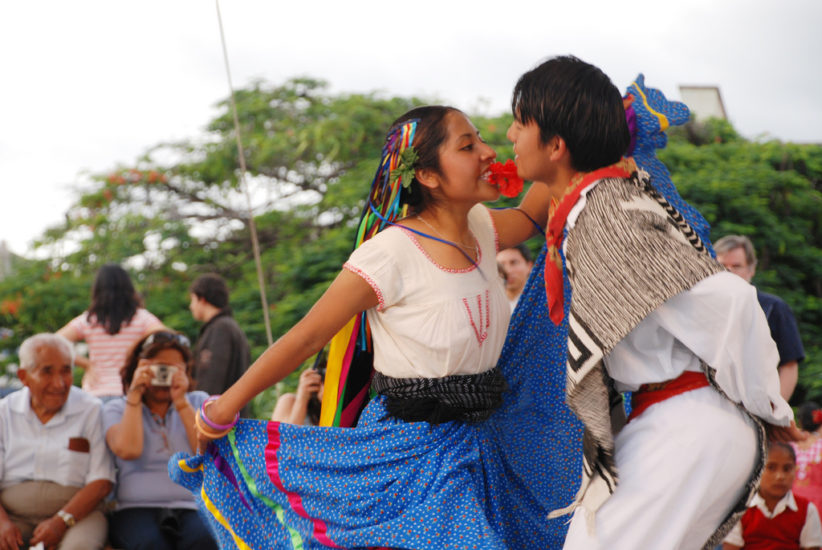 “I speak the sounds of the people of the rain” – If you ask the Mixteco people about their first language, the reply is just one example of Mexico’s rich linguistic diversity. Yet linguists, artists and human rights defenders are warning that Mexico is becoming increasingly monotone – and that discrimination, as well as repressive assimilation policies by the state, are partly responsible for their death.

Maya, Mazahua, Zapotec: Mexico’s 68 native languages are under attack. Earlier this week, a letter written to incoming President AMLO by linguists that warns that Mexico’s linguistic heritage, “one of the richest and most diverse in the world”, is increasingly being replaced by Spanish.

However, this is not just a case of a new generation switching to a ‘lingua franca’ for practical reasons. Instead, many accuse discrimination of society but also the state as responsible.

“I was still beaten in the hand for speaking my language at school”, claims Mexican linguist Yásnaya Aguilar. As a member of the National Institute of Indigenous Languages, she accuses the state of severe cases of systematic discrimination and violence against children speaking an indigenous language.

“In 2006 a girl was reported to have been hung upside down as punishment for speaking Nahuatl in class; in 2005 an Otomi girl could not be registered with her name in her own language because the civil registry did not allow it; and in 2015 high school students were punished with going to wash the bathrooms if they spoke chantino in school”, Yásnaya Aguilar reported at an anti-discrimination workshop held earlier this year.

While these are very drastic cases, there is a general sense of public discrimination against speaking an indigenous language.

“Many indigenous people believe it is better not to be heard speaking their language in Mexico“, says Rapper Juan Santiago Tellez from Mexico City, who is composing his rhymes in Spanish and Totonaco, his first language. “Sometimes parents can feel they are protecting their children by not teaching them the indigenous language.”

Contributing to the discrimination are also stereotypes propagated in popular culture; art that is too often made about indigenous people, but not necessarily with them.

Instead as acknowledging indigenous citizens as being victim to discrimination and injustice, a common misrepresentation is to depict their struggle as a sad but somewhat inevitable extinction of ‘historic’ or ‘mythical creatures’.

“It is very common that indigenous characters are represented as mythical beings of the past, or at least on their way to becoming part of the past”, complains Mexican film writer and director Armando Bautista, who himself has a Mixteco background. ” But they fail to address how society has contributed to the discrimination, marginalization, and exploitation of these communities”.

This seems to affect communities worldwide: When photographer Jimmy Nelson published controversial photo collection of the world’s indigenous people called ‘Before They Pass Away‘, it triggered angry reactions: “It is not true that indigenous peoples are about to die out. We will be around for a long time, fighting for our land, living in this world and continuing to create our children”, criticized Brazilian Yanomami spiritual leader Davi Kopenaw the author.

Does the decline of indigenous languages mean that there is more cultural assimilation? Not necessarily, as identity is a much more complex phenomenon than just the language spoken.

Indeed, it was the long practice of the Mexican state to identify people as indigenous only by the language. When this census practice was reformed in 2000 and brought surprising results: Only half of those who identified as indigenous actually spoke an indigenous language and of those who did, more than 80% also spoke Spanish.

And while many think of indigenous communities as being tied to life in remote villages amidst nature, bustling Mexico City now has become home to a large indigenous population. For example, Valle de Chalco on the edge of the city boasts 38 languages, largely due to the influx of migrants from the highly diverse state of Oaxaca.

The transformation of the life of indigenous people through this migration is not an easy experience, says movie director Bautista, who explores themes around the loss of nation, family, and self by following members of the Mixtec community in the recently released movie ‘Tiempo de Lluvia’, (In Times of Rain) that earned the Best Emerging Film award at the Oaxaca International Film Festival.  However, these are stories that need to be told by members of the community themselves, he stresses.

More voices of indigenous artists could be heard at the Indigenous Poetry festival in Mexico City earlier this month. And in the city’s music scene, bilingual indigenous rappers like Juan Santiago Tellez are giving their own twist on what indigenous culture means in modern Mexico.

It remains to be seen how incoming President AMLO will answer to the latest petition for saving Mexico’s linguistic diversity. In the meantime, art and culture may give indigenous citizens a much-needed voice – in whatever language they chose.

Read more:  ”There is no indication that it is a progressive government.” The Zapatistas criticise AMLO

Day of the dead arrives in Mexico

Dust off your skeletons: Welcome to the Mexican towns that clean their dearly departed